Capstan Ag brought Pulse Width Modulation (PWM) to spraying in the mid 1990s. Over the past 20 years, it has become commonplace on Case sprayers as AIM Command and AIM Command Pro, and as an aftermarket product, called Sharpshooter or PinPoint, on any brand sprayer. If you’re new to the concept, read about it here and here. 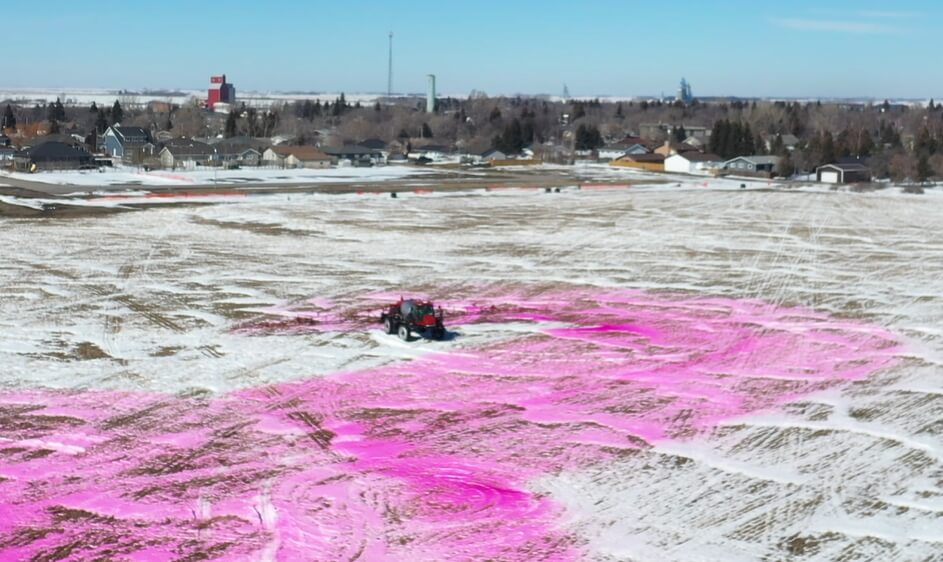 The Capstan EVO addresses both issues. Introduced in January of 2019, it gives older AIM Command units affordable turn compensation. As a bonus, a complete new EVO install on non-PWM sprayers is available at a significant discount compared to most other PWM products.

EVO features many of the same basic PWM capabilities as its bigger cousins, but with a shortcut, explain Capstan representatives.

As always, a change in travel speed changes the duty cycle of the pulsing solenoid, adjusting flow rate of the nozzle without a change in pressure. This provides the consistency in performance that we love about PWM. Drift or coverage are controlled by the operator who makes changes to spray pressure from the cab, with a commensurate background adjustment in duty cycle so that travel speed is unaffected.

With the EVO, the shortcut is that sectional control is by plumbed section. Technically it’s possible to add sections, but the rate controller and the sprayer wiring would have to allow it. 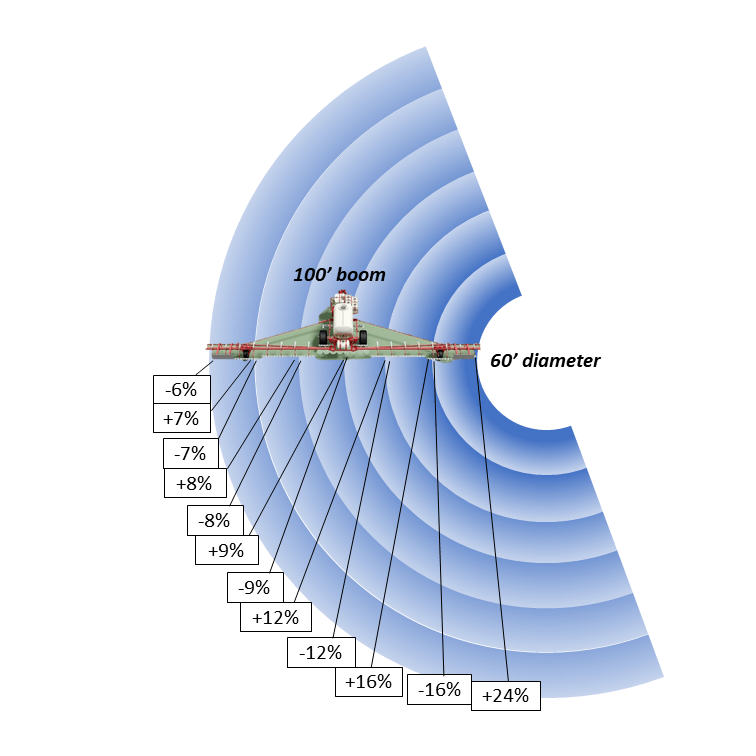 Spray dosage for sectional turn compensation for six sections of equal size, with the centre of each section applying the target dose. As always, some lateral movement of spray from adjacent nozzles will occur.
Turn compensation is part of EVO, and this is an important benefit that was previously only available in more expensive versions of a PWM product. Each section will have a fixed turn compensation based on the speed of the centre of the section. Its performance will depend on the size of the sections.

For a 100′ boom with six 10-nozzle sections turning around an object with a 60′ diameter, our modelling shows that the deviation from perfect turn compensation is least on the outer wings (where it’s most important) and grows towards the inside of the turn. In this example, the outer section’s end nozzle under-applies by 6% relative to the ideal, and the innermost nozzle on this section over-applies by 7%. 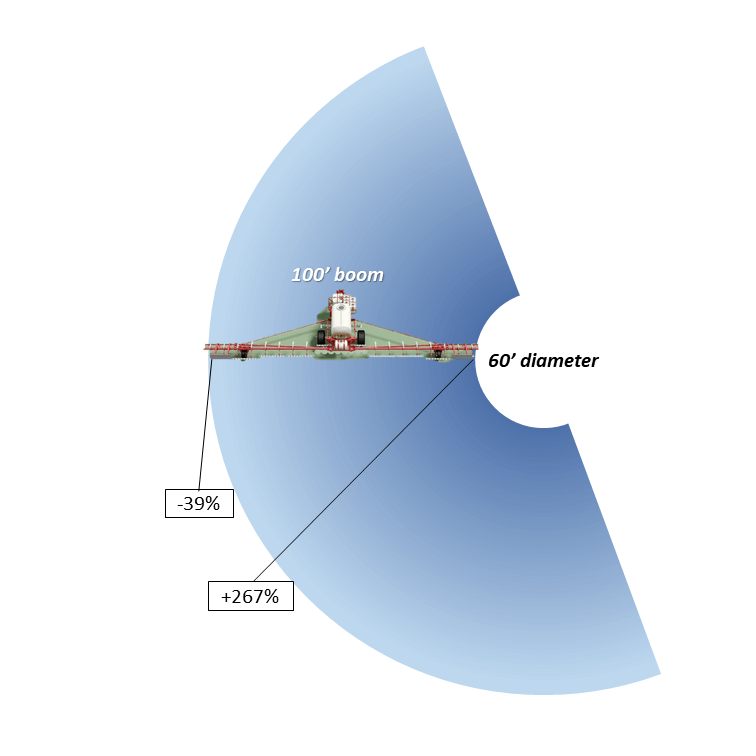 Recall that it’s more important to be accurate on the outer wing than on the inner, for the purpose of delivering the full spray dose in a turn.

Repeated year-after-year under-dosing at the periphery of a turn such as field corners, or around permanent features such as sloughs, trees, or stone piles results in weed problems.

EVO is intended for users with an original SharpShooter or AIM Command who would like turn compensation but don’t want to a whole new PWM system. EVO provides new modules and a new screen, but users save money because they can keep their existing solenoids, says Capstan.

Capstan says that EVO is for every brand of sprayer ordered without pwm control from new to 15 years old. It’s an easy upgrade for owners of AIM Command & SharpShooter systems because these already have most of the components, and install times are therefore lower for these machines. Existing solenoids and wiring harnesses can be retained.

Owners of high clearance pull type sprayers will also see the advantage of turn compensation and pressure control at an attractive price point. 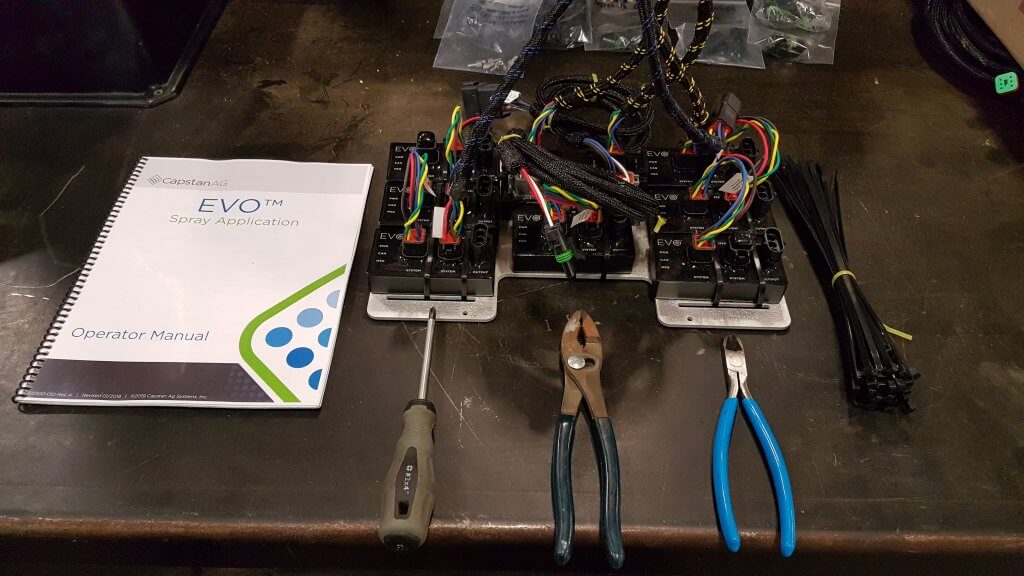 EVO modules and tools needed for installation
I was present during an installation of these new modules on an existing Case 3330 sprayer with AIM Command. It took one person, with occasional assistance from a second, less than 1 h to do the conversion. A new installation would require an additional two hours to install wiring harnesses and solenoids. 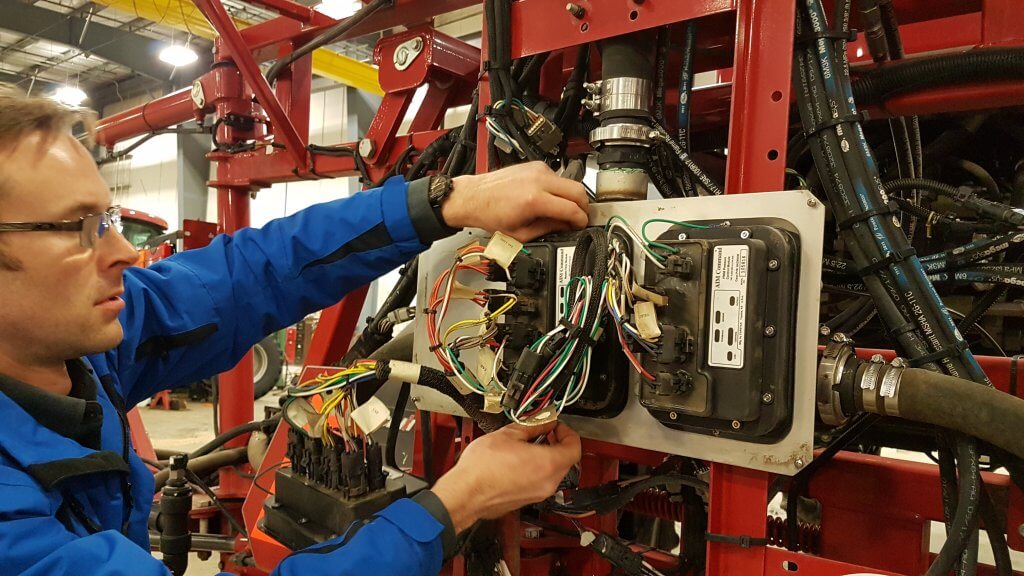 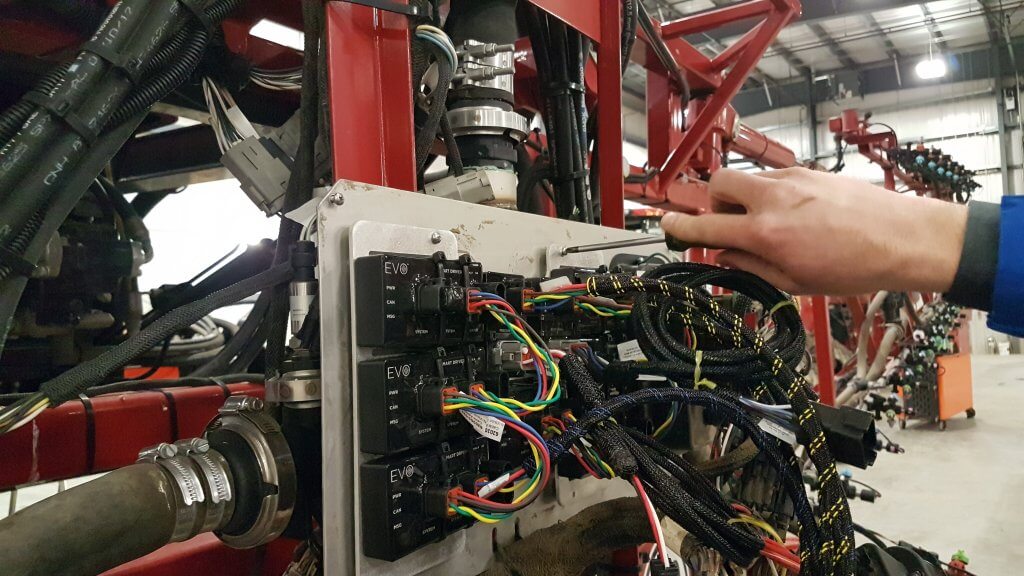 Installation of EVO board containing all modules and replacement plugins

The EVO electronics run in parallel to the existing sprayer monitor. It allows the existing monitor to control sections and determine the flow requirements. It does not control pump speed, it simply reads the flow, pressure, and gps signal from the sprayer’s systems and uses them to determine the duty cycle (DC) that ensures the spray pressure remains constant. On AIM Command units, the pressure control module remains installed and pressure adjustment remains possible through AIM Command in cab controls. 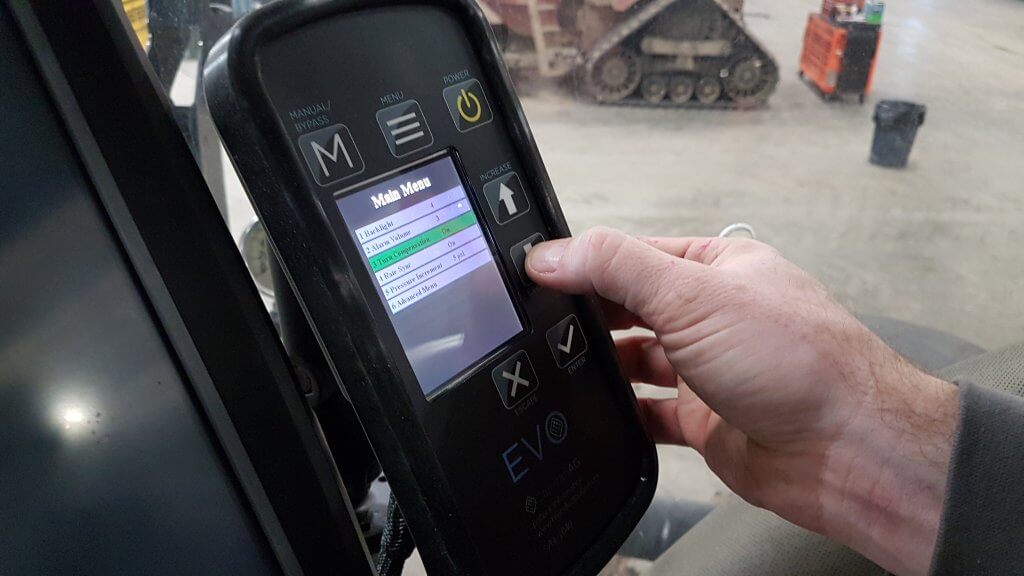 The monitor has an intuitive readout of average DC and a bar graph showing the DC across sections in a turn. If this bar maxes out on the outer sections during a turn, simply slow down to lower average DC and provide extra capacity to those sections. 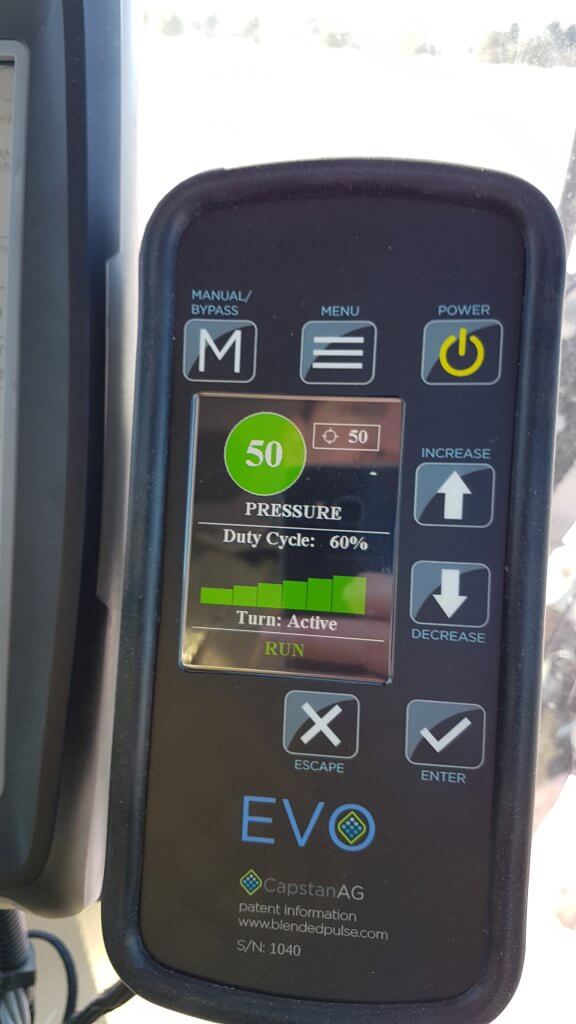 EVO monitor during operation. Readout includes current spray pressure, duty cycle, and turn compensation status.
Lowering the cost of PWM makes it attractive to a new group of users. It also offers a more affordable upgrade path for owners of AIM Command or SharpShooter systems that currently do not have turn compensation. 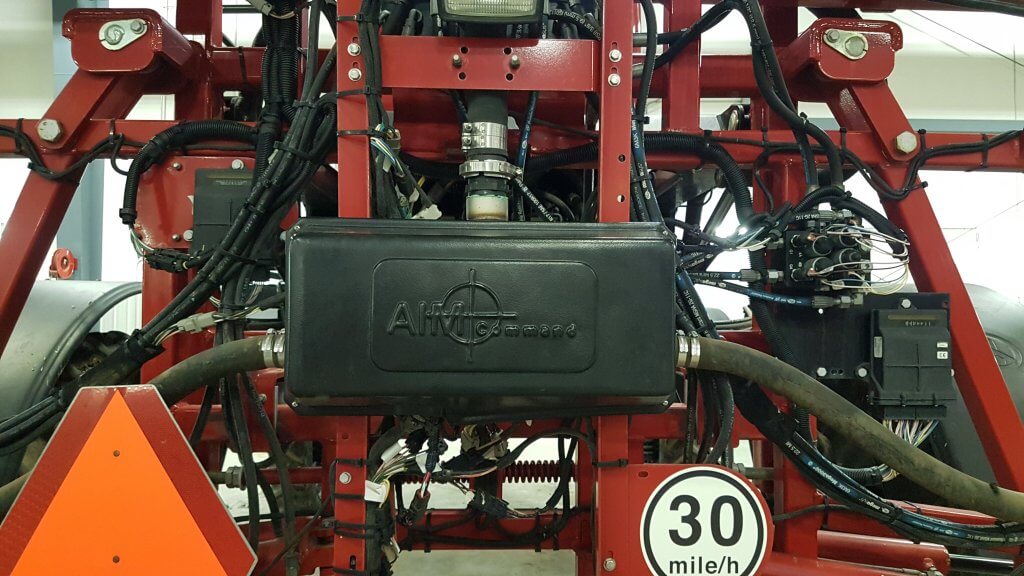 The cover says AIM Command, but the guts are EVO